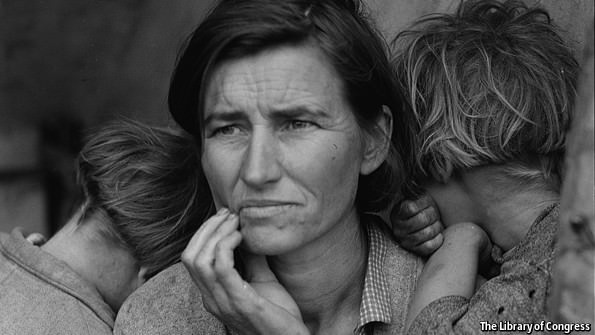 Dorothea Lange (1895-1965) is recognized and celebrated for her iconic documentary photography of the striking poverty during the 1930s Great Depression Era, as well as her innovation to the genre of documentary photography. One of her most well known images, “Migrant Mother” (1936)  actually prompted the government to assist the community of which the Mother and her sons were a part. It also, through newspaper publication, informed the United Sates public of the atrocious living conditions in farming communities. Her work exemplifies the social and political functions that photography posses as her images reflect the harsh conditions of the poverty stricken society. In this bold representation of the truth there is an intrinsic beauty to the photographs, the composition and light, the tragic struggle of humankind.

“Dorothea Lange: Grab a Hunk of Lightning” will air tonight, August 29 on PBS and explore this pivotal figure in many different lights; photographer, mother, wife, and political acitivist. The documentary, made by her granddaughter, will feature unknown works, unseen footage and rare interviews. The economist writes that it not only explores her career and photographs in depth, the documentary also delves into her interpersonal relationships; we will see an intimate moment of Lange cooking in her kitchen, always equally as pensive as her photographs would have us imagine.