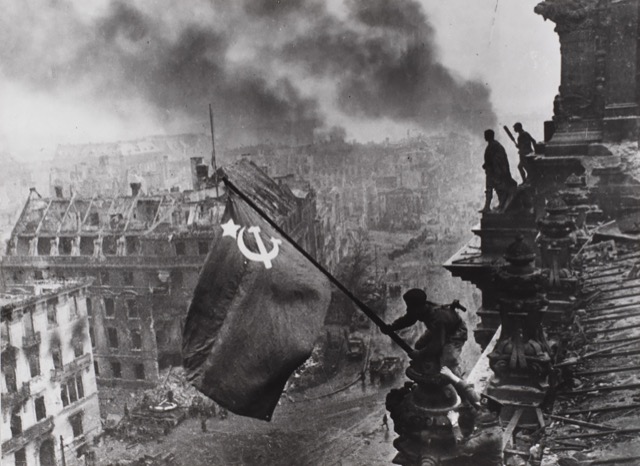 Yevgeny Khaldei’s 1945 photograph of the Soviet flag flying over the Reichstag in Berlin was an iconic image in postwar USSR, but Westerners became familiar with it only after the fall of the Iron Curtain in 1989–90. The print acquired by Andrew Gruft and Claudia Beck dates from the mid-1990s.Born into a poor Jewish family in Ukraine in 1917, Khaldei was a self-taught photographer who became a wartime photojournalist when Germany invaded the Soviet Union in 1941, and he was with the Red Army as it advanced toward Berlin in the spring of 1945.

By most accounts, Khaldei was aware of Joe Rosenthal’s staged photograph of US Marines raising an American flag on Iwo Jima and hoped to make an equivalent image in Berlin. Unable to find a usable Soviet flag, he flew to Moscow, obtained three red tablecloths, and had a tailor sew a yellow hammer, sickle, and star on each. He returned to the front as the Red Army entered Berlin. Two days after the Reichstag’s capture, he ascended the roof and made thirty-six exposures as three soldiers – following his directions – hoisted the improvised flag over the city.

Published in the newsmagazine Ogonëk on May 13, 1945, the chosen image presents a view from slightly above the flag as it unfurls over the wreckage in the street below. The flag-holder’s stance is heroically confident, and his alignment with the building’s statuary evokes the historical import Khaldei was after. In subsequent versions of the picture, including the one seen here, columns of smoke were added to heighten the drama.

Although this picture seamlessly aligned with Stalinist propaganda, its instrumentalization doesn’t completely efface its affect; the histories to which it’s attached are too expansive and intense for that. I never discussed this image with Andrew, but I imagine it had a special resonance for him, given that in 1939 he and his family fled Poland on foot to escape Nazi persecution. The photograph’s dramatic character led to its use on the poster for the 2005 exhibition of Andrew and Claudia’s collection at the Vancouver Art Gallery, a copy of which still hangs in their home.