Over the past ten years, I have encountered Jordan Bennett’s work in different contexts. The first time was at the Vancouver Art Gallery’s Beat Nation, where I experienced Turning Tables (2010), an installation comprising two turntables crafted from walnut, oak, and spruce that produces the sounds of Bennett learning his ancestral language. I have observed the form, mediums, and materials of Bennett’s work vary wildly; the connective tissue, however, is an ongoing engagement with the work, histories, and culture of his Mi’kmaq ancestors. Bennett’s research-based practice interrogates who he is and where he comes from, imparting a sense of Mi’kmaq worldview in the contemporary moment; al’taqiaq: it spirals is no different. Bennett continues his in-depth engagement with Mi’kmaq quillwork, relocating the motifs of a box currently held by the Museum of Vancouver (MOV) onto the skull of a moose that once moved across Mi’kmaq territory, and then photographically documenting its presence back on the land. 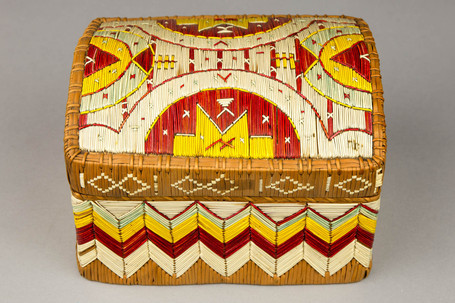 While Bennett’s ancestors have always used porcupine quills as a decorative material, the bark insertion of dyed quills blossomed as a distinctive visual tradition in the mid-eighteenth century, a practice expanded by the consumerist desires of European settlers and travellers.¹ Mi’kmaq women – like many other Indigenous women – responded to their changing circumstances and the imposed economic system by adapting traditional techniques with introduced styles and materials. Made to be sold to non-Indigenous outsiders, items made of birchbark and covered with mosaics of appliquéd quills became strongly associated with the Mi’kmaq through their extensive circulations as “tourist” or “souvenir” art. Historian Ruth Whitehead notes that during the eighteenth and nineteenth centuries, “the Victorian mania for decoration on even the most prosaic of household furnishing created a big market for quillwork novelties.”² Whitehead calls attention to the continuity of imagery from ancient Mi’kmaq petroglyphs to these quill-adorned objects; Bennett’s oeuvre likewise continues a broader tradition of reimagining ancestral visual compositions. While they once embellished the domestic interiors of middle- and upper-class Europeans and Canadian settlers, a substantial amount of Mi’kmaq quillwork now resides in museum storerooms. Many of these objects emanate joy, playfulness, and experimentation, and a sense of intimacy; every quill was inserted into the bark by hand. They are beautiful, captivating objects.

Focusing on their beauty, however, may obscure the social and political conditions of their making. The development of this “transcultural aesthetic expression,” as art historian Ruth Phillips observes, was “articulated through the asymmetrical power relations of colonial regimes.”³ Indeed, that which has often been understood as a “curio” or “souvenir” was born of a complex process involving agency and marginalization – of self-representation, but also consumption of the Other.4 Phillips observes that, despite their status as commodities, such souvenir objects were invested by their Indigenous makers with meaning, conveying knowledge and creative expression. The production of decorative objects was a matter of both economic and cultural survival in a time of strengthened assimilationist policies.5 The gendered dynamic of this history, moreover, must also be recognized. Mi’kmaq women (and all Indigenous women) have historically borne – and continue to bear – the brunt of colonial violence, and yet their work became a significant source of income for supporting their families. And so their creations are with us today. 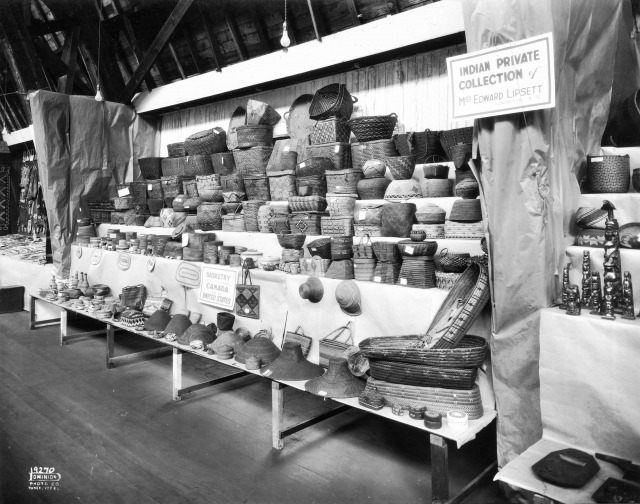 The box Bennett has chosen as his source was likely made in the late nineteenth or early twentieth century. It was purchased by Mary Lipsett, the wife of a successful American businessman who frequently travelled, amassing collections of Indigenous and Asian art. In 1941, the couple established the Edward and Mary Lipsett Indian Museum, opened on the Pacific National Exhibition grounds in Vancouver. At this time, it was the only museum in Canada dedicated to Indigenous material culture. In a series of archival photographs documenting this museum and earlier displays of the collection, this particular box is visible in one image ofan imposing wall of basketry – predominantly from Northwest Coast communities, also likely made for sale and trade. A placard reads, “Indian Private Collection of Mrs. Mary Lipsett, Vancouver B.C.,” but does not offer a means of differentiating or providing context for these objects. We do not know when or where Lipsett acquired this box, or the identity of its creator – typical of historical Indigenous material culture in institutional collections. This was often oflittle concern to collectors like the Lipsetts, for whom objects stood in as representations of a generic Indian Other, a means of establishing racial difference but also a distinct Canadian identity. As Phillips observes, Indigenous-made souvenirs were understood as documents not only of places travelled to but also of peoples presumed to be vanishing.6 In the late 1960s, the Lipsett collection was transferred to the Museum of Vancouver, where this piece has likely sat in storage ever since, far away from Mi’kmaq territory.

In recent years, Bennett has created a series of works in conversation with the quillwork creations of his ancestors. Like many other Indigenous artists, scholars, and community members, he is recuperating the colonial archives that were assembled for the benefit of a non-Indigenous public. Today, Indigenous people are navigating these institutions that were not built for them, engaging with materials for their own needs and concerns. They are demonstrating what Haida artist Raymond Boisjoly has referred to as an “unforeseen potential” of historical objects – just as the objects’ creators, while making work to sell and circulate in different contexts, were also “smuggling” into the outside world a sense of who their people are and their experiences.7 I have experienced and been privileged to witness community members reconnecting with ancestral objects, and it is often an emotionally powerful moment, one complicated by virtue of it being mediated by Western institutions. Through his practice, Bennett draws from experiences visiting collections to reposition and transform historical Mi’kmaq quillwork, expanding the motifs beyond the limits of the object itself, its display case, and even its holding institution; he manifests the connections these works have to contemporary communities and territories that are often invisible.8 In doing so, he honours the generations of Mi’kmaq women who made birchbark quillwork. He prompts us as viewers to see these mosaics and their makers differently, recovering them from the silence and anonymity of the storeroom. 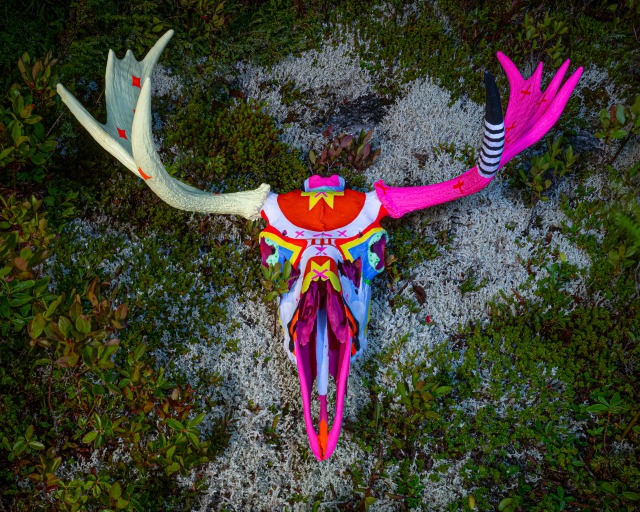 While still employing paint as a medium, with al’taqiaq: it spirals, Bennett takes his engagement with quillwork in a new direction. Rather than physically visiting the source object, Bennett relied on its photographic documentation and digital presence, registering the evolving complexities of circulation and access to Indigenous cultures and knowledge. As with previous quillwork-based pieces, he dramatically transforms what was once an intimate, domestic object into something expansive and public-facing. Photography makes this amplification possible, adding yet another layer of remediation: the quillwork pattern – the creative impulse of its original maker – is transmitted from the box to its museum documentation, by Bennett’s paintbrush to the skull’s surface, and to its current manifestation as a large-scale photographic installation. These interconnected layers are reflective of the persistence and transmission of Indigenous knowledge and values through both space and time; perhaps this is what the work’s title is referencing as spiralling – perpetually moving, increasing in scale and reach.

The intensely bright colours Bennett uses in adopting the motifs from the box’s lid reflect his ancestors’ ready adoption of synthetic dyes to facilitate their visions. The skull can also be understood as souvenir-like: a memory of the creature that was taken and the food it provided; skulls have also been painted and adorned by Indigenous artists as part of tourist art economies. With its strong presence, it is tempting to view the painted skull as the work itself. Indeed, the photograph feels like a form of documentation, as Bennett captures the return of both the mooseskull and the quillwork motif to their homelands. Yet this documentation is distinct from the museum’s, which like all photographic documentation produced for the collections database, further severs the connections objects have with their original contexts. With this image, Bennett places the animal, the box, and Mi’kmaq territory in relation.

If there is an ambiguity in the term “souvenir,” what, then, is being remembered? As I write this, in October 2020, a long-simmering dispute has boiled over in Mi’kmaq territory in regard to the Mi’kmaq enacting and affirming their right to a moderate livelihood via lobster harvesting in their waters, as their ancestors have always done. They have been subject to race-based violence at the hands of non-Indigenous commercial fishermen, indifference from the police, and ignorance from Canadian politicians. As a descendent of Musqueam fishers and a member of a community that has faced similar struggles in asserting our right to fish in our ancestral territory, I would be remiss to not think about the connections that Bennett’s work implicitly makes between our respective contexts. I think about the women – my ancestors, Bennett’s ancestors – who continued to create beauty, challenging themselves to make increasingly intricate baskets and boxes during some of the darkest times of settler-colonial violence and assimilation efforts. The savagery of the settler state, however, as manifest in the harms currently being inflicted upon the Mi’kmaq of Nova Scotia, is yet further evidence that we are not yet out of the dark. “I wanted to make it beautiful,” Bennett states. He conveys the joy, hope, and respect that exists in every quill stitch. This work, too, will help us remember the dignity of our peoples in the face of injustice.

Endnotes
1. Ruth Holmes Whitehead, Micmac Quillwork: Micmac Indian Techniques of Porcupine Quill Decoration, 1600–1950 (Halifax: Nova Scotia Museum, 1982), 24.
2. Ibid., 49.
3. Ruth B. Phillips, Trading Identities: The Souvenir in Native North American Art from the Northeast, 1700–1900 (Seattle: University of Washington Press, 1998), 3. As Whitehead comments, “The status of women during this period was not at all conducive to the retention of quilling techniques, much less a flowering of the art. … The traumas of the contact period were particularly severe for women.” Whitehead, Micmac Quillwork, 22.
4. As Phillips notes, “The absorption of souvenir wares into the clothing and domestic spaces of non-Aboriginal people offered a means of capturing Indianness and rendering it consumable.” Phillips, Trading Identities, 10.
5. Ibid., 14.
6. Ibid., 8.
7. Daina Augaitis, “Edenshaw’s Legacy in Contemporary Art,” in Charles Edenshaw, ed. Robin K. Wright and Daina Augaitis (London: Black Dog; Vancouver: Vancouver Art Gallery, 2013), 217.
8. As Bennett remarks in an artist statement referring to this body of work: “I attempt to give some of these designs their voice again.” Jordan Bennett, in Insurgence/Resurgence, ed. Jaimie Isaac and Julie Nagam (Winnipeg: Winnipeg Art Gallery, 2017), 48.