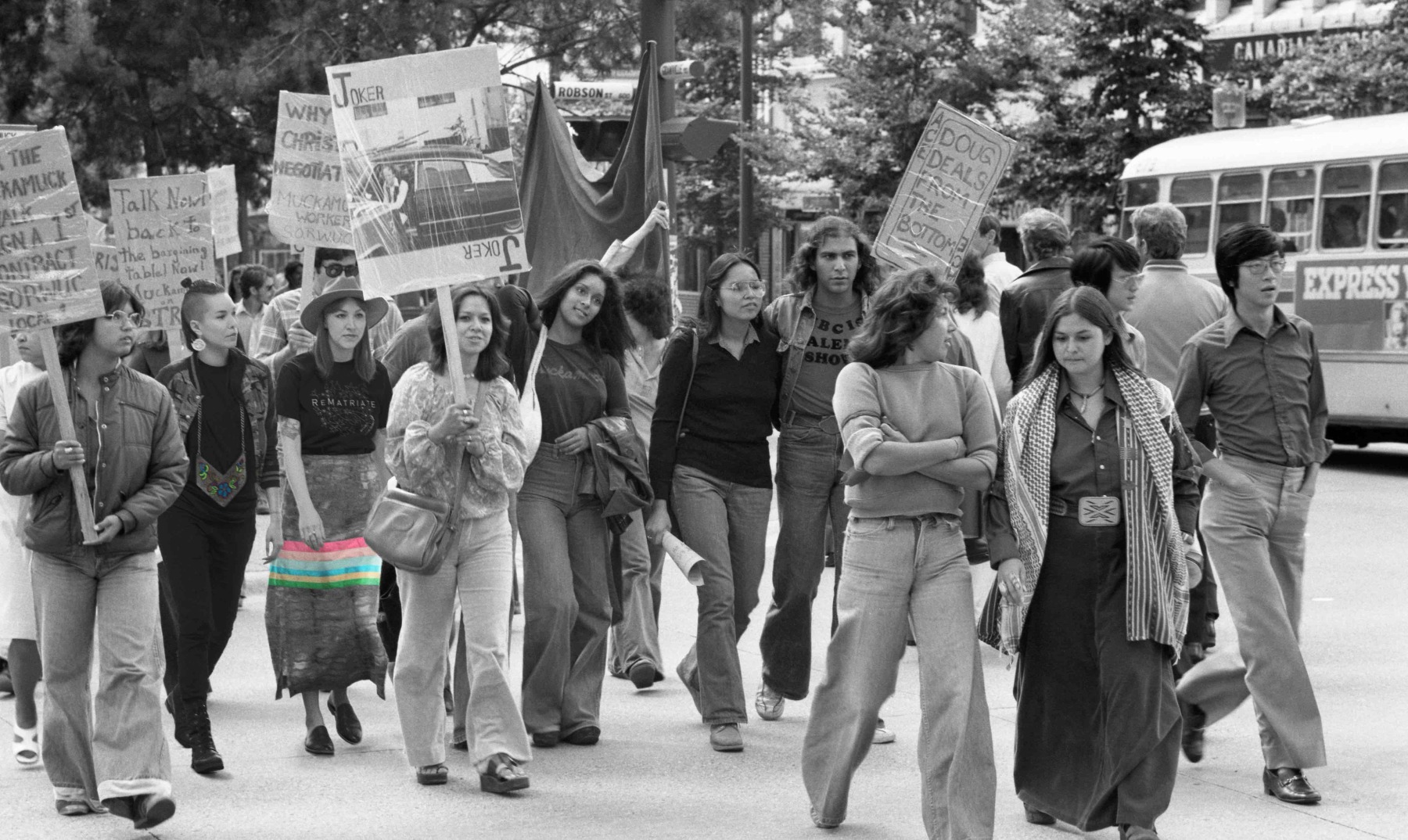 Dana Claxton in collaboration with Sean Griffin, Muckamuck Strike Then and Now, 2018, composite photograph, 42.57 x 25.4 cm. Courtesy of the Artists.

A group of over a dozen individuals, wearing flared jeans and walking forward in unison, carry protest signs, which piece together details of unfair working conditions and demands for contract negotiation. The image was once an archival black and white photograph documenting the 1978 strike by Indigenous union members of SORWUC (Service, Office, and Retail Workers Union of Canada) who were employed at Muckamuck Restaurant, a non-Indigenous-owned establishment serving North Coast West Indigenous cuisine. The photograph has been transformed by Vancouver-based Hunkpapa Lakota artist Dana Claxton, in collaboration with Sean Griffin, its title offering a clue as to its manipulation; not immediately apparent in Muckamuck Strike Then and Now (2018) is that amid the group are two time travellers. The colour tinting on the beaded necklace worn by one, and a ribbon skirt worn by the other, links them to a protestor leading the group, whose beaded belt is similarly illuminated. The time travellers are members of the ReMatriate Collective (formed in 2015), an Indigenous women’s collective that uses social media to counter misrepresentations and appropriations of Indigenous identities, offering a platform for Indigenous women to determine their own representation. Borrowing the slogan “Yours for Indigenous Sovereignty” that appeared in one of the Muckamuck Strike’s archival photographs, the ReMatriate Collective transformed the slogan into a banner, which hung prominently outside of the Morris and Helen Belkin Art Gallery at the same time as Claxton’s composite photograph hung within it.

Where does movement reside in photography, and how does photography activate recent histories? In her book Photographic Returns: Racial Justice and the Time of Photography, Shawn Michelle Smith explores the ways that artists “follow photographs to variously trace, bend, pierce, truncate, extend, and fold time […],”¹ the photograph, “an emblem of temporal disturbance that shows, quite literally, how a past inhabits a present.” ² In her photographic series In the Near Future (2009), American artist Sharon Hayes re-stages a series of historically significant protests, carrying the iconic signs associated with these movements and re-enacting them as a one-person demonstration. In one, she holds the “I AM A MAN” placard first introduced during the 1968 Memphis Sanitation Strike, in which some 1300 Black sanitation workers walked off the job in protest of discrimination and dangerous working conditions, and which was famously photographed by Ernest C. Withers. In an interview with art historian Julia Bryan-Wilson, who asked how Hayes’ evocation of this historical slogan might differ from other approaches, Hayes responded:

I can’t just cut out the protest sign and put it on a wall in this present moment – it just becomes style. That excision is not actually an investigation; nor does it tease out how history is rupturing in the present moment. Instead, it becomes anesthetizing of the conflict. My interest was to actually work with protest and protest signs by putting myself in the space of enactment.³

Hayes considers herself a demonstrator in the Brechtian sense, whereby demonstrators, in Brecht’s epic theatre, re-enact an event that has taken place. Movement, here, is central, explicitly affirming embodiment as inextricably tied to the realm of the political – the body, a material conduit for tracing the socio-historical.

Chronophotography, a term coined in the late-19th century by French physiologist Étienne-Jules Marey to refer to how sequences of photographs of movement could be used to study motion, evidences the longstanding fascination with the seemingly contradictory elements of stillness, temporality, and movement as contended within photography. Despite technological advances allowing for the most minute of movements to be documented and studied, it is the decisive moment – photography’s ability to halt movement – that continues to captivate. Images that stay with us are often those that arrest movement, transform the living figure into a statuesque icon. American photojournalist Jonathan Bachman’s 2016, Taking a Stand in Baton Rouge has been studied by Raymond Drainville as exemplary of iconography’s value to social media research; the photograph of Ieshia Evans, taken in Baton Rouge on July 9, 2016, during the protests following the shootings by police of Alton Sterling and Philando Castile, shows Evans appearing to topple three riot gear-clad police officers by sheer force of presence. Although several before-and-after photographs show the police approaching and apprehending Evans, it is the image of Evans in seeming still confrontation with the excessive force deployed in the face of peaceful protest – Evans’ economy of movement – that seems to anticipate its almost-instantaneous reading as a “secular icon” at the same time as its meaning shifted for the thousands of social media users who shared, manipulated, and meme-ified it across social media platforms.⁴

In the present day, photographs move through virtual spaces like a stadium wave; an image repeated by thousands of users as a form of political solidarity where words fail in the face of the weight of injustice. Photography, when mobilized in such a way, can bring struggle to greater public consciousness and spur calls to action. Images of protest inspire and threaten; when mainstream media attempts to downplay the numbers in attendance at any given protest as a means to delegitimize support, photographs fight back against such misrepresentation. In an era defined by political uprising in tandem with technological advances in facial recognition, photography has been re-deployed as a surveillance technique, introducing new concerns over the ethics of photography in political protest. But photography becomes counter-deployed as a tool of accountability against those who use force to arrest and immobilize moving bodies in the streets. Like bodies, images, too, form a critical mass and a palpable rhythm through which its own powerful resistance culture emerges, offering a view to political movements and embodied movements as moving in time with contemporary movement culture.