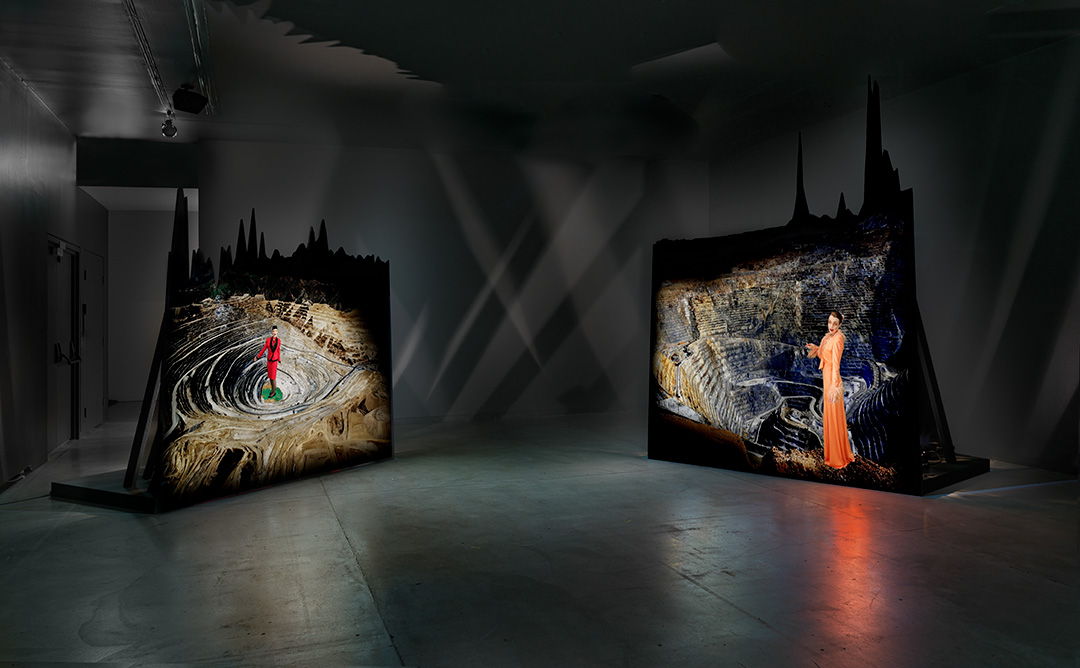 Matilda Aslizadeh is a visual artist based in Vancouver, British Columbia. Her three-channel video installation Moly and Kassandra, 2018, is on view at the Vancouver Art Gallery until November 1, 2020. Upon entering the space, the viewer is confronted with three large-scale black wooden flats on which separate depictions of an operatic performance appear. Singing to empty mine pits resembling post-apocalyptic Greek amphitheaters, Kassandra attempts to contextualize the abstract notion of value, as reflected in a contemporary dependence on big data forecasting, with the destructive activities of extractive economies. Aslizadeh leans on the story of the element molybdenum to look back at the Western democratic shift to neoliberalism in order to carve out space to consider what happens next in the story of our dependence on an underperforming system.

Allison Mander-Wionzek: Your current exhibition at the Vancouver Art Gallery features Moly and Kassandra, a three-channel video installation, projected onto an alternative support structure, in a dimly lit room. Can you share a little bit about your installation and your thinking around it?

Matilda Aslizadeh: The support structures reference film or theatrical flats which usually have a highly polished facade and a more hastily constructed and aesthetically disregarded space in the back.  More generally, I have been interested in moving towards a more sculptural dimension in my work as a result of a long ongoing process of thinking about why I project film – and narrative film in particular- in a gallery space and trying to arrive at what is intrinsic about that experience.

On a conceptual level, the tension between the sculptural and projected elements of the installation echo the tension between the material and immaterial aspects that are at work in the economy. With increased financialization, value can be created on the market without the necessity for material production, since speculation alone can lead to the soaring and plummeting of stocks. And yet, despite this disconnection between materiality and value, the economy’s material traces are pervasive in the land, air and water and in the mass movement of populations following ever more precarious labour. The top edge of each structure in the installation represents charted data of three items: molybdenum stock value, the rate of inflation of the US dollar, and the extraction rates of molybdenum. The sculptural elements dominate the exhibition space in terms of scale, but are also obscured, blending into the dark and mirroring the desire to ignore material consequences in the economic thought of the past forty years.

For the current exhibition of Moly and Kassandra at the Vancouver Art Gallery, I was able to make the sculptures larger which made it possible to use the erratic shapes at the top of them to accurately reflect the real fluctuations in those three data sets. I am happy with the more exact replication and with how the shapes also evoke the landscape.

Allison Mander-Wionzek: Since we’re talking about the charts in the piece, can you describe them a little bit more and the process of creating them?

Matilda Aslizadeh: The process began with a decision to research a commodity called molybdenum – research for another project allowed me to arrive at this particular commodity and learn that it has been a good indicator of economic fluctuation. I decided to use molybdenum as an example to talk about larger economic themes and started thinking about the notion of value as I charted collected data (from 1912-2018) representing different items onto a graph. One line of the graph reflects how much molybdenum is mined annually (production), the second represents the stock value in US dollars (value)  and the final line tracks US dollar inflation rates (currency). Each of these three charted lines were used to determine the shape of the flats on which the videos are projected, as well as to develop the vocals for Kassandra. I thought about these three data sets as a triangulation of value.

Once I developed these three charts the rest of the process was very fluid. I gave the charts to Graham Meisner – a Vancouver-based composer with whom I frequently collaborate – and asked him to translate the charts into a vocal trio in the style of modernist classical music. I left the decision of how to interpret the charts to Graham and didn’t require any strict adherence to certain units translating to particular notes. I’m interested in referencing that idea of strict translation between incommensurable things, but not necessarily performing it. 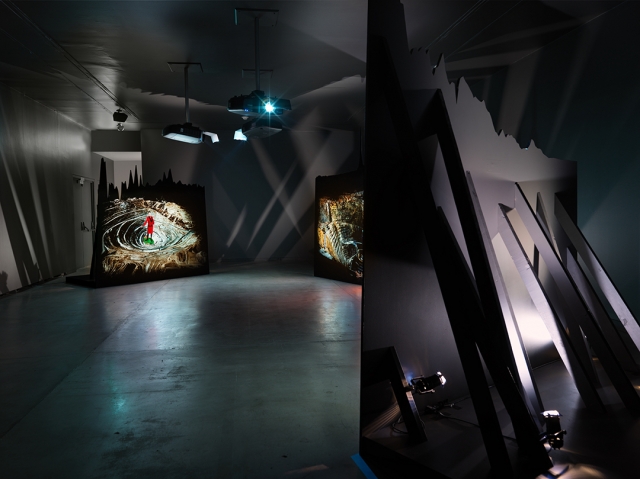 Allison Mander-Wionzek: You mentioned your interest in the narrative approach. This work really does have a clear narrative flow. Can you tell us why that is important to you?

Matilda Aslizadeh: I’ve always had an interest in narrative film. In some work, I use conventional narrative tropes in order to draw in the viewer, but in this case, I would say narrative is used as more of a conceptual construct evoking the idea of prophesying or recounting history. There is a massive story that Moly and Kassandra attempts to cover in three minutes, which is the story of this element, molybdenum, as a stand-in for the story of the global economy for the past hundred years.

Allison Mander-Wionzek: For me, being in that space was quite ominous. I really felt an urgency to listen. Yet, there are no articulated words. What were you trying to achieve with the Kassandra figure and her interaction with your audience?

Matilda Aslizadeh: It’s great to hear your reaction! Some other reactions I’ve received focus on the simultaneous tragic and humorous elements at play in the piece. I am less attached to the idea of a particular reaction, but certainly invested in immersing the viewer and creating an emotional reaction in general – a sense that there is something at stake in the act of listening.  In regards to the intelligibility of the vocals, or lack thereof, the absence of clarity mimics the predicament of Kassandra, a prophetic character from classical Greek mythology who can see the future, but is cursed to never be believed, particularly when she has bad news. Probably her most well-known appearance in the Greek stories is when she forecasts the fall of Troy, but no one listens. So, there is this way in which she has important  knowledge but is either dismissed or, in some interpretations, simply not understood. In Aeschylus’s tragedy, Agamemnon, she is represented as someone who transcends time, experiencing the past, future and present all at once.

A second element of the Kassandra figure’s performance is a gestural embodiment of the charted line represented by each of the three personas. I worked together with Camille Hesketh, who did both vocals and performance for Kassandra, to develop a set of gestures for each line of data. For example, in the “currency” video channel she constantly spins to one side, poses, then spins to the other side, to reflect the balanced nature of that line. The “production” video channel features her standing in a power pose with a wide leg stance and thrusting her chest up into the air in a more and more exaggerated way, emulating the undeterred escalation of the line that describes the amount of extraction. And then the final line, which represents the stock value and is more volatile has her melodramatically flaying up and down with the highs and the lows. The gestures were based on the charts and their specific form was inspired by the poses of models in fashion magazines from 1979. 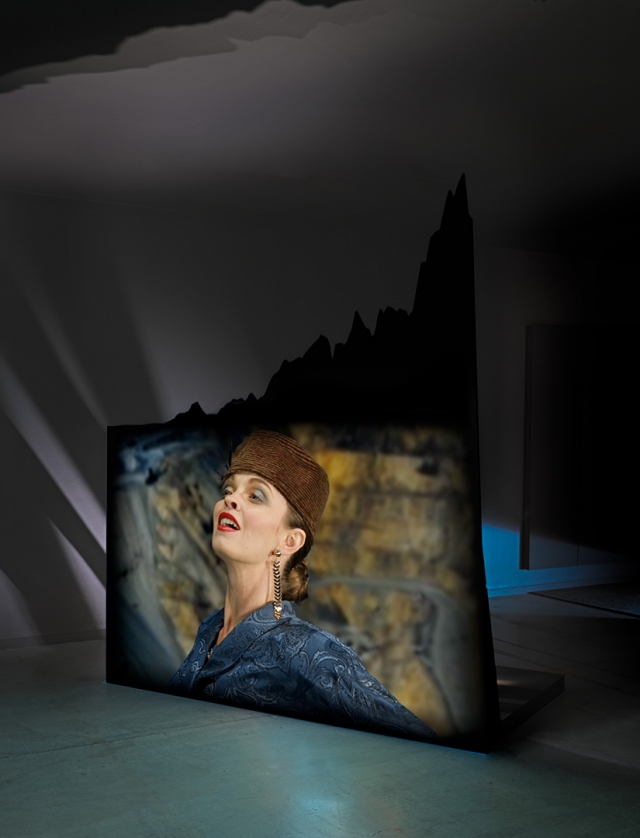 Allison Mander-Wionzek: I understand that the dress of the figure is important to your concept because you were trying to mark 1979 as an important political shift from Keynesian to neoliberal economic policy making in the Western democratic model. Can you tell us more?

Matilda Aslizadeh: I wanted, as you mention, to reference that moment in the late seventies/ early eighties, widely regarded as the origins of neoliberal economic policy. The welfare state was in crisis throughout the 1970s for a host of reasons, and the response to this crisis, epitomized by the democratically elected figures of Regan in the USA and Thatcher in Britain, was to let the market reign through massive deregulation.  Kassandra is a harbinger of the results of this catastrophic decision, grounded in that moment through the fashion. The volatility of her performance also reflects the volatility of stock value after 1979.

Allison Mander-Wionzek: I am feeling compelled to return to the exhibition again so that I can look more closely at the top of those flats, where you have sculpted the charted data. They very quickly evoke the landscape, as you mentioned, but I had not drawn the connection to the chart lines. I recall a particularly interesting moment on one of those charts when the line dips so low it cuts into the projected video, which has new resonance for me in the context of this conversation.

You completed the piece two years ago in 2018. What were you thinking about then that led you to this project? And how has that thinking evolved over the last couple of years?

Matilda Aslizadeh: The idea for this project came about as I was researching another narrative project inspired by a ghost town in Northern BC called Kitsault. This was a company town constructed to house the workers of a molybdenum mine. It was built over a few years, and a whole community of people moved in, but when the stock price of molybdenum crashed, the company evacuated everybody. It was only occupied for about eighteen months and has been maintained since, serving as an eerie time capsule of the late seventies/ early eighties.  Many of the themes in Moly and Kassandra grew out of my research, and the desire to conduct some relevant formal experimentation, including creating a soundtrack that is integrally connected to the value of the element, incorporating more sculpture, and interrogating ideas of prophesying and forecasting in relation to both economics and personal psychology.

I’m still thinking through the relationship between forecasting and belief, especially in light of the pandemic.  All the negative outcomes of neoliberalism were already looming – rising inequality, environmental devastation, political hypocrisy- but the pandemic has really laid them bare in ways that seem undeniable. All the pitfalls of neoliberalism are now fully on display, and yet there remains intense political polarization at this moment, with large slices of the population absolutely refusing to believe that there is a systemic problem. This phenomenon can be tied to the conversations around racism that are happening now as well.

For me, the current situation highlights the way economic policy is intimately linked to social justice issues, and how it is with great peril that we disconnect one from the other. This disconnect was starkly apparent as many corporations issued expressions of solidarity in response to George Floyd’s murder, essentially side-stepping (or disbelieving?) their complicity in the current capitalist system that both created and continues to reproduce the conditions under which racism thrives. One of the major tragedies of neoliberal culture is the way it encourages thinking about social injustice as separate from economic policy – epitomized by the cringeworthy descriptor “culturally progressive and fiscally conservative”- and I am excited by all the contemporary conversations that think them together.

Allison Mander-Wionzek: Thanks so much for taking the time to share your thinking about your practice with us. 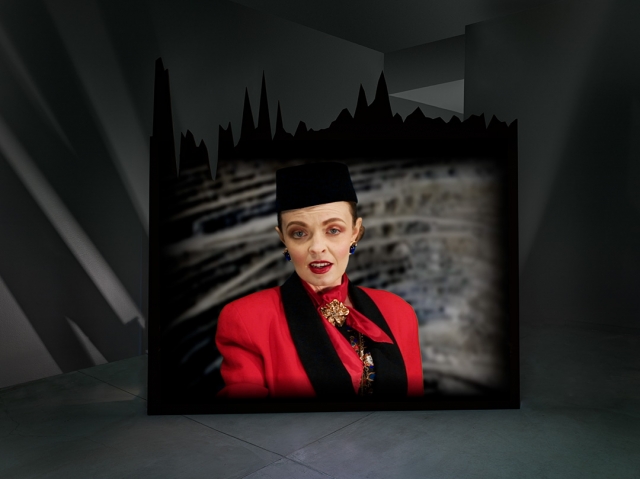