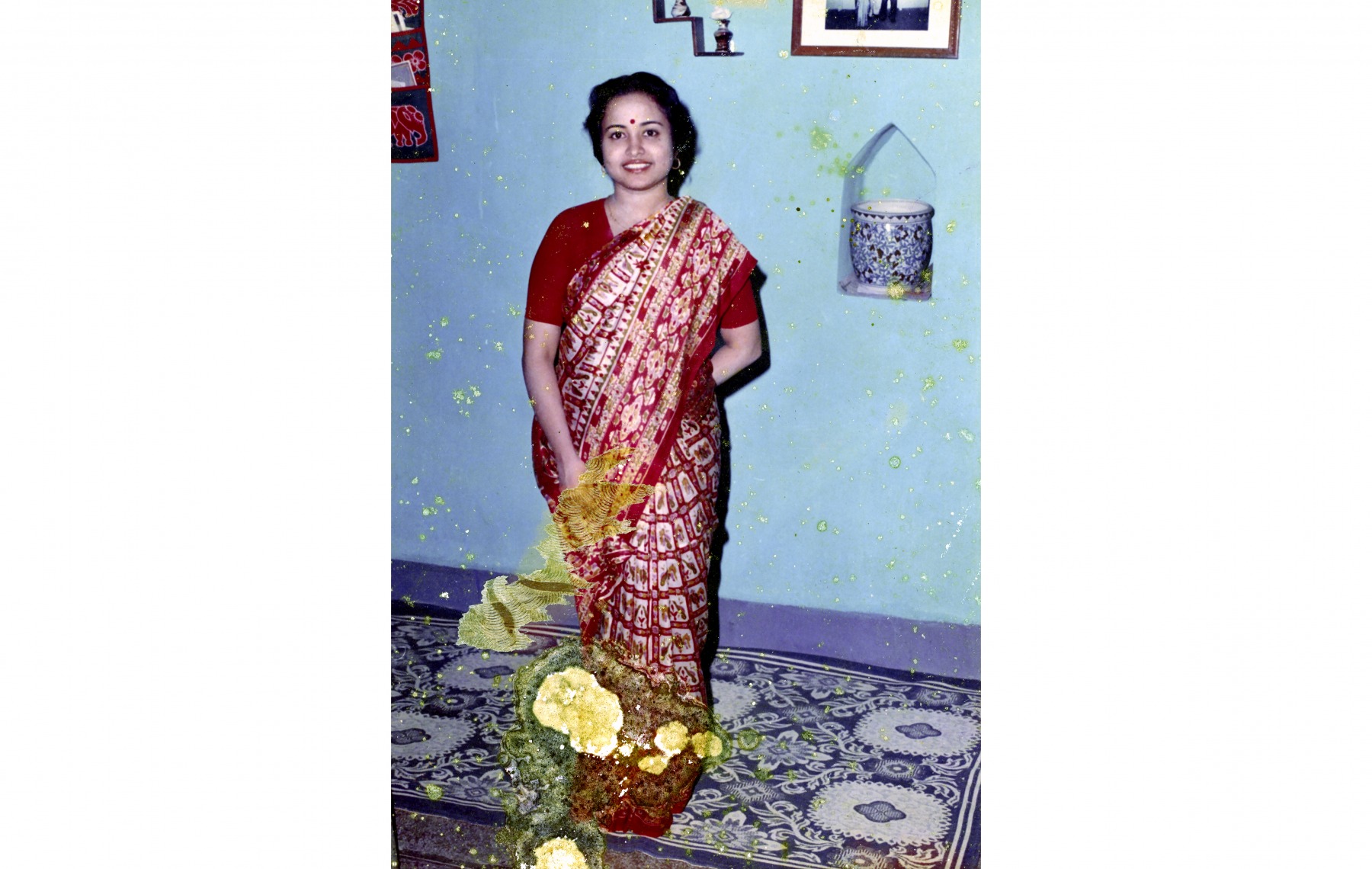 “Afternoon with Michel, sorting maman’s belongings.
Began the day by looking at her photographs.
A cruel mourning begins again (but had never ended).
To begin again without resting. Sisyphus.”

In the winter that I spent revisiting my family albums over and over again, I pulled several photographs out of what had been their designated slot for years – pockets of clear, cheap plastic measuring exactly 4 by 5 inches that is standard across all the albums that I have inherited. The plastic has turned brown and brittle with age and the photographs encased within have burned and bled onto it, morphing plastic into the memory of a photograph – a prosthesis. The family album is a body built from several prostheses, rickety at the spine but functioning as it does – as memorabilia for the lives it represents and as Memoriam of the lives of people who passed away. 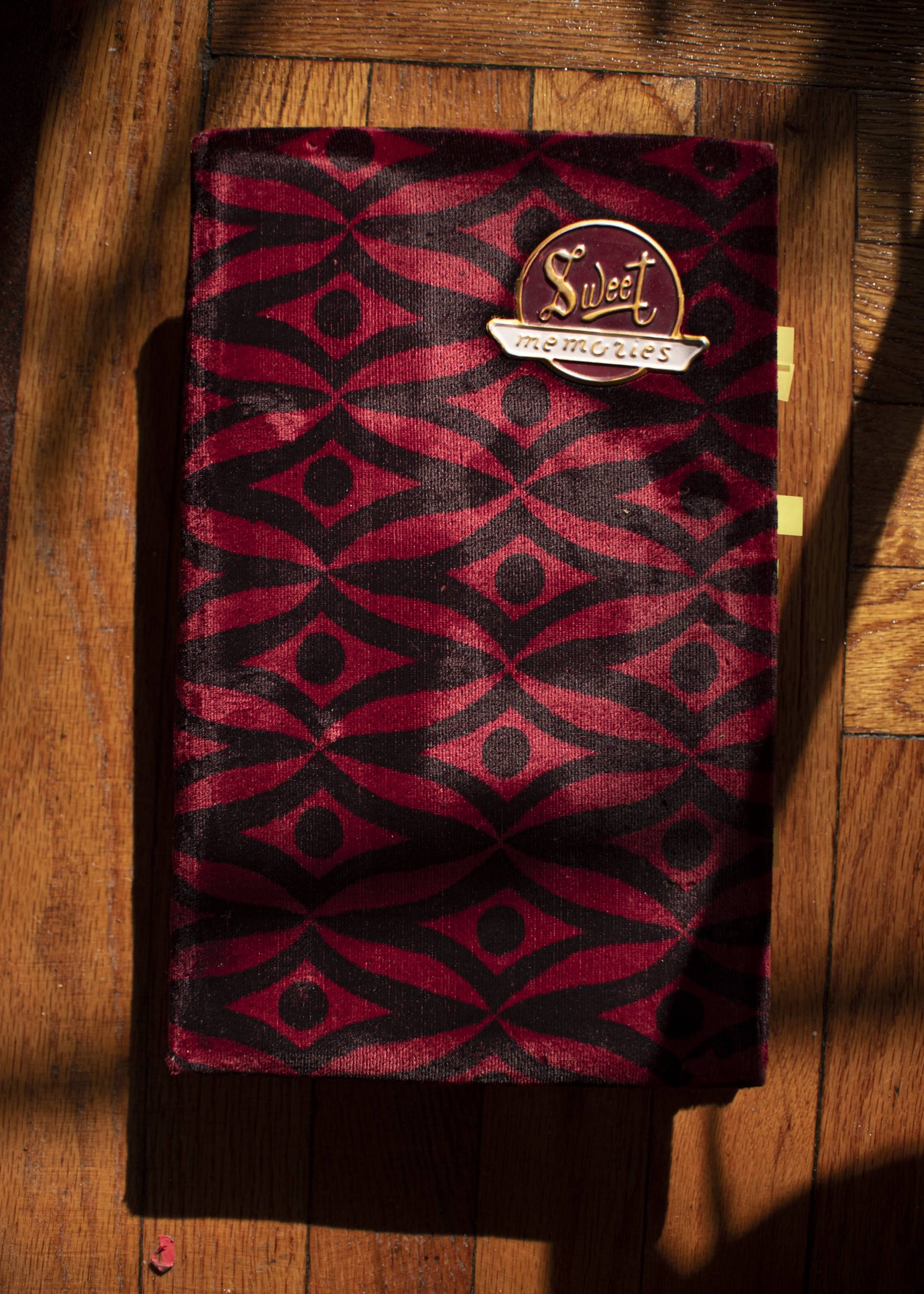 My mother lost her mother to breast cancer. I know my grandmother from a memorial photograph of her in the family album, hand-painted over by an artist in white paint to brighten her eyes and her eternally still string of pearls. I also know my grandmother from a photograph of her funeral – her body covered gently in an off-white sheet resting on the floor, under the weight of garlands of fresh marigolds, roses, and jasmine. Her forehead and hair are smeared in sindoor (vermilion) – a symbol of matrimony. Even in death, she is a wife, a mother. My mother, whose eyes and nose have sunken into a deep red on her brown skin from crying, sits beside her, staring into a distance. My grandfather sits next to her looking straight into the camera as other people surround them with their faces cropped by the photographer.

Family albums traditionally celebrate success, so it is not surprising that the only major family gathering excluded from the album is the funeral, as it marks the reduction and impoverishment of the group. The absence of death from the albums does not deny its presence from our lives but hides the intermittent mourning from future generations: from their inheritors. If we understand the construction of the family album as a form of myth-making around relationships, values, and beauty, we would choose to not depict moments of familial unrest and trauma for posterity. Marianne Hirsch writes, “This myth or image – whatever its content may be for a specific group – dominates lived reality, even though it can exist in conflict with it and can be ruled by different interests. It survives by means of its narrative and imaginary power, a power that photographs have a particular capacity to tap.”² The family album becomes a stationary relic that repeats and reinforces these myths, as Barthes writes in Camera Lucida: “[w]hat the Photograph reproduces to infinity has occurred only once: the Photograph mechanically repeats what could never be repeated existentially.”³

In having the photograph from my grandmother’s funeral in the family album, the completed process of mourning is repeated every time the photograph is revisited. There are photographs in the album of people I do not recognize and then there are photographs I have come to love which, now liberated, lie on my desk under a pile of magazines, between books as bookmarks, taped to the wall, forgotten on scanner beds – as objects in their own right – no longer points of reference to our lives as curated by my father.

My father, an orthopedic surgeon and an amateur photographer, set out on a mission to fill a plastic slot in the albums for every print of the photographs he took. Before this, they lay scattered in uneven heaps – stale, half-eaten by termites, their colours bleeding into one another – clumped together just enough to make a sense of their subjects: my father’s patients. These photographs were a young surgeon’s visual testimony of successfully operating on broken and bleeding limbs. One photograph before the surgery and one post-op, and another when the stitches come off as the skin heals. These photographs – interspersed with family portraits – found an uncontested spot in the albums my father made.

Hirsch sees photography as “the family’s primary instrument of self-knowledge and representation” and, as such, a carrier of “family memory.”4 Typically the photographs that comprise the family album are taken by a family member or a member of the family’s social circle, all existing within the context of the family’s life. There is even an opportunity to visit a nearby photography studio and have a quick portrait taken by a professional photographer for pleasure and aspiration. This aspiration often merges with performativity and playfulness. The subjects dress in special garments and accessories, posing against painted backdrops that depict monuments, such as the Taj Mahal, and exotic travel destinations with snow peaked mountains. The staging creates a mythical realm that draws from one’s desire for heightened self-knowledge, representation, and the means to visit places one might not be able to due to financial constraints.5 Family albums consist of photographs that are curated to portray romantic ideals of family life, as opposed to the messy realities.

I discover a photograph of my mother in the album taken in a photo studio where she’s my age, wearing a silk saree – “It was too expensive to wear anywhere else without ruining it, but I wanted a photograph of me in it,” she recalls – against an exquisite backdrop of jasmine flowers in bloom as she smiles, cheerfully looking at the photographer. This photograph is pushed into a slot next to a photograph of a bloodied thigh ripped and held apart by forceps to make a skin graft for one of my father’s patients. Masoom Raza, as I have always known him – first by his name and then by the fact that it was his thigh in this photograph – accidentally blew his hand off with a firecracker, leaving it mangled completely before he was rushed into the emergency room. As I flip through a few pages of the album looking for more evidence of the surgery between portraits of my mother, I find a photograph of a hand, thumbless, held together by stitches post-surgery. There is a relief in knowing that Raza, who I, as an eight-year-old, often heard of at the dinner table as my father discussed his day with my mother, has found a place in my family album. 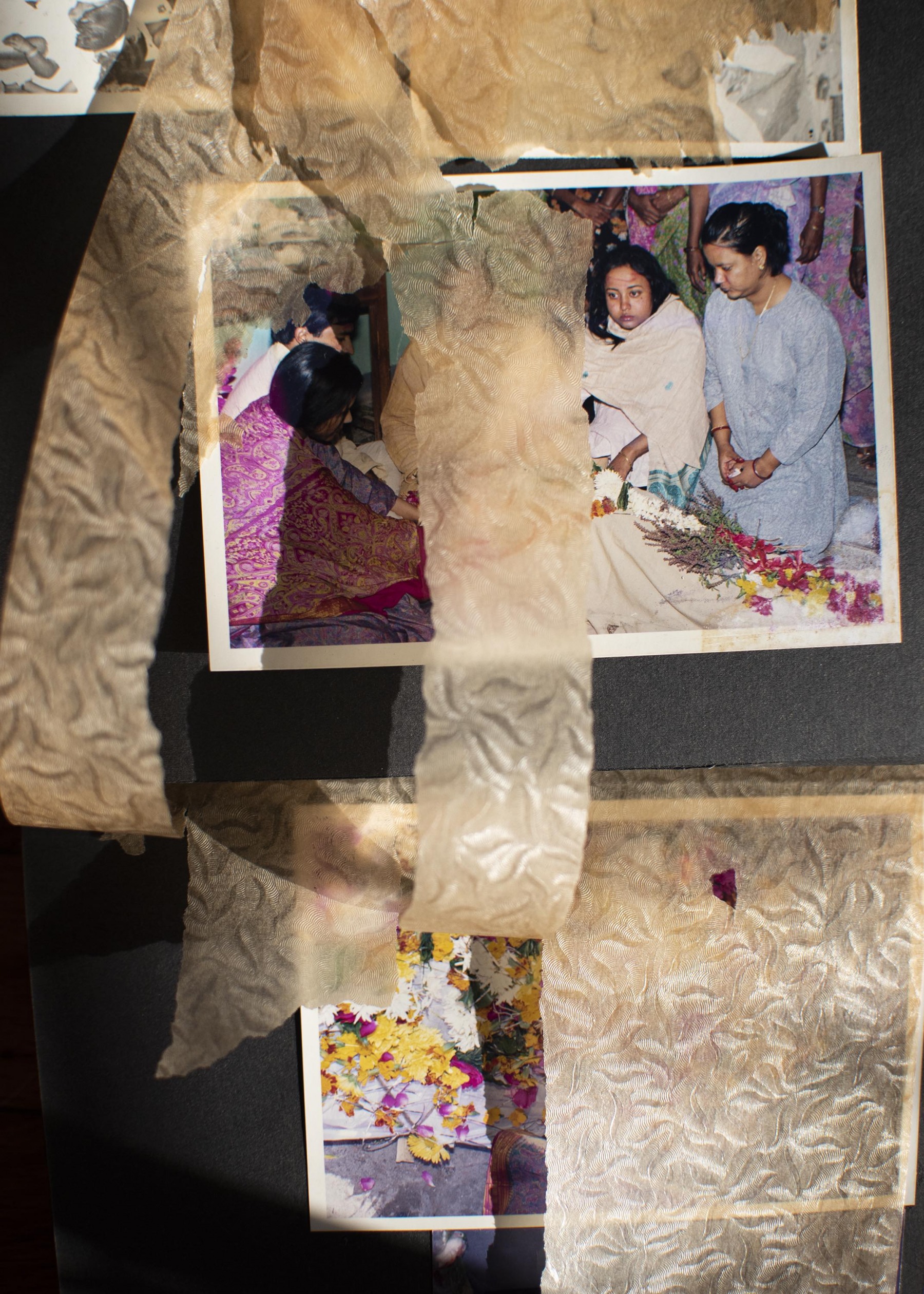 There is a missed opportunity for complete myth-making in my family album, a lost potential. The reality of my family album is that it was curated by my father who, arguably, is not a curator. He photographed my mother for love and his patients for work on the same roll of film and remained true to himself in portraying his life in the albums – torn between his family and laborious hours spent in the operating room.

When I look at the album today, I see what my father was doing. He was building an album for mourning. Over the years, I have seen my father lose some patients to death and many more to letting go and forgetting after their recovery. I have seen him mourn the loss of my mother’s youth and with it, her warmth. In these albums, I saw my mother mourn the loss of her mother and her fall from my father’s loving gaze after he stopped photographing her. The bloodied medical photographs, like perfect punctuations throughout my mother’s life in portraits, depict the life they lived together; the life that they will probably never diverge from. The bright red velvet cover of the family album reads Home Sweet Home in gold lettering and, without hesitation, I take it for that. It is Home, and sometimes Sweet.