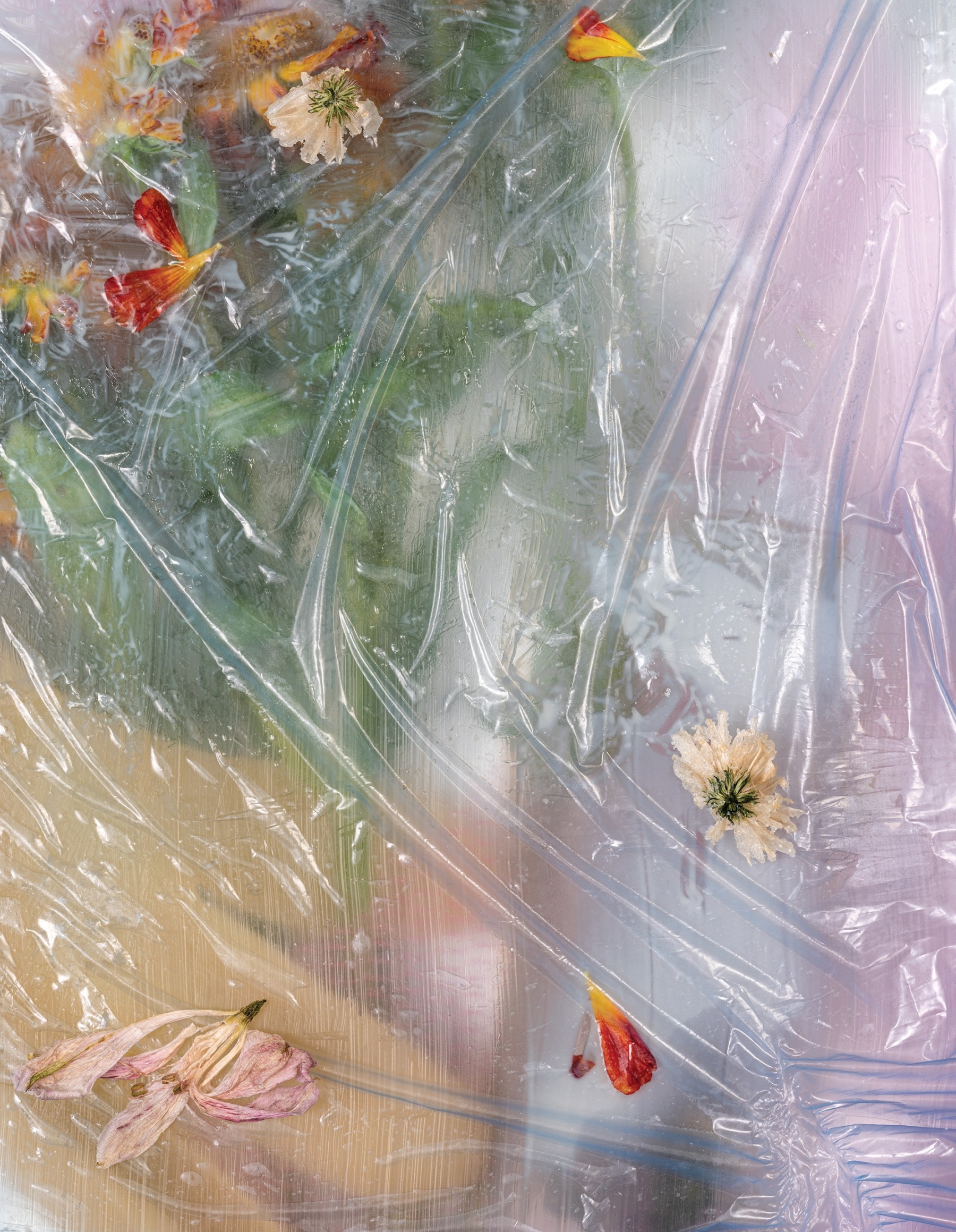 Enveloping the Contemporary Art Gallery Façade and Yaletown-Roundhouse Station is Michelle Bui’s newly commissioned large-scale installations titled Envelop #1–8 and Mutable Materialism. As a whole, this still life series investigates the changing symbolism of objects and materials present in supermarkets and convenience stores, particularly ones encountered in dense cities like Montreal where Bui lives and works. Bui uses the photographic process like an abstract painter and sculptor, making organic and synthetic materials that are marked by commerce and consumption ambiguous, fluid and poetic. Luminous and seductive, the physicality of each image compels the viewer to reflect upon the intersection of still life, advertising, desire, and material culture.

Chelsea Yuill
With a background in painting and drawing, what pulled you into photography and how does your initial training in the visual arts influence your current practice?

Michelle Bui
The first Fine Arts class that I took as a child was at a very rigorous and classical school in Montreal called Mission Renaissance where we spent our time reproducing works of Old Masters or arranging our own still life sets with the various fake fruits, crystal glasses, feathers, bouquets, and silverware. On a large shelving unit we could find a mix of fake antique objects and thrifted goods that we treated and manipulated with the utmost care, already sensing the aura and potential those objects carried. I would carefully select a few objects, a dark velvet background, and would light the scene from an angle, inventing a narrative that would help in creating a dramatic composition. I would then spend weeks along with the other students reproducing the arrangement on paper with dry pastels – drawing and erasing, perfecting the image to emulate with most accuracy the composition that lay in front of me. In recent years, I’ve moved through various mediums, but thinking back on those memories, it is striking to see how that period has been fundamental to my practice today and how the thought process involved in building an image, either through drawing or photography has stayed quasi-identical up to this day.

CY
The organic and inorganic materials you encounter in supermarkets, and convenience stores are brought into your studio to build an image. How do you select materials and what is your process in creating a photograph?

MB
In contrast to those antiques from my drawing classes that I needed to search out, I’m interested in the sheer amount of stuff that is ready to be bought, consumed, thrown out, and that fills our cityscape to the point of banality such that it almost becomes invisible. No matter what our consuming philosophy or approach is, there is a broad tendency towards overfill and overabundance, an excess that is glazed over with a pending sense of doom, surely heightened by the knowledge of our inevitable decline. You don’t need to go very far to witness the sheer amount of stuff so readily available to us and in such vast quantity which is why those convenience stores, supermarkets, dollar stores, florists, hardware and craft stores – all at a walkable distance from my home or studio – have become a way to source materials through daily errands. That constant feeling of overload and overstimulation, with things and images coming at us and assaulting our senses to a point of disorientation, is a starting point for my practice.

Concretely, I rarely look for things to photograph, rather, objects come to me and pique my attention through their colour, texture, shape. The most promising ones are banal, familiar to most, but also hold the potential to be strange or to create a friction through their association with other items or materials. And it’s precisely in those common stores where all kinds of objects rub shoulders without any particular hierarchy – isolated from the friction of their production – that I find objects that are so ordinary they can be part of a universal language. So it makes sense that a dish glove can be associated with pork tripes – they can both be found in the same aisle, and share the same pictorial language in my practice that allows me to shift the symbolism of commerce and turn it inwards into something intimate and sensorial

CY
How do the photographs on view at the Contemporary Art Gallery (CAG) mark a new approach to still life from the photographs installed at Yaletown-Roundhouse? How do you see these two site-specific works being in conversation with one another?

MB
The installation at the CAG derives from a series that I had started in 2020 that moved away from the table-top still life into imagery that is more liquid and abstract. Both projects, while visually distinct, are connected through the gathering of objects and materials which remains the same. On the other hand, composing the image is quite different, as one relies more on the efficiency of visual language in a very controlled studio setting and the other project is more about mark-making and opening up a space for stains and traces to appear, sometimes over a period of time as the composition takes a life of its own. Concepts of haptic visuality and the idea of formlessness has always been part of my practice, but the sense of touch, the desire for poetry and softness felt increasingly essential during that year and ended up seeping into my practice as well.

I’m constantly thinking about the photographic surface, where the medium is also the message. In this still life series, a lot of it’s achieved through the use of bright colours, as for the more recent series I’m interested in ways emotion can be conveyed and shared through the curve of a line, the creases and folds on a surface. At the CAG, those various visible layers of plastic film that were stretched, folded, wrinkled, overlapped – they activate the surface-like marks on skin first through the sense of vision with a desire to reach the sense of touch. I’m hoping the installation becomes a connective space where the viewer is moved by it and where the architecture merges into a sensory cloth.

Image: Michelle Bui, Envelop #1, from the Mutable Materialism series, 2021–22. Courtesy of the Artist.