The artist editions can be purchased online. All proceeds from edition sales support the Capture Photography Festival. 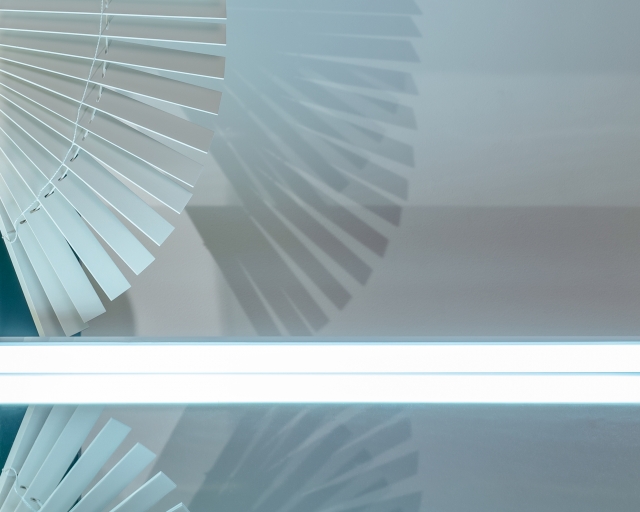 The 2020 Capture Artist Edition is a detail chosen by the artist from her commission for the 2020 BC Hydro Dal Grauer Substation Public Art Project, and is a digital photograph.

Printed by Tricera Print. With each purchase of a 2020 Capture Artist Edition, Tricera is offering a 15% framing discount. Contact Tricera at [email protected] for framing.

Kapwani Kiwanga studied anthropology and comparative religion at McGill University, Montreal and art at l’école des Beaux-Arts de Paris. Kiwanga’s work has been exhibited at the National Gallery of Canada, the Esker Foundation, Calgary; Centre Georges Pompidou, Paris; Glasgow Center of Contemporary Art; Museum of Modern in Dublin; Hammer Museum, Los Angeles; Salt Beyoglu, Istanbul; South London Gallery; Jeu de Paume, Paris; Albertinum, Dresden. She was the commissioned artist of the Armory Show (2016), where a special focus was devoted to her work. In 2018 she was named the inaugural winner of the New York Frieze Artist Award; that same year she was the recipient of the Sobey Art Award. She is currently short-listed for the 2020 Marcel Duchamp Prize. Kiwanga lives and works in Paris. 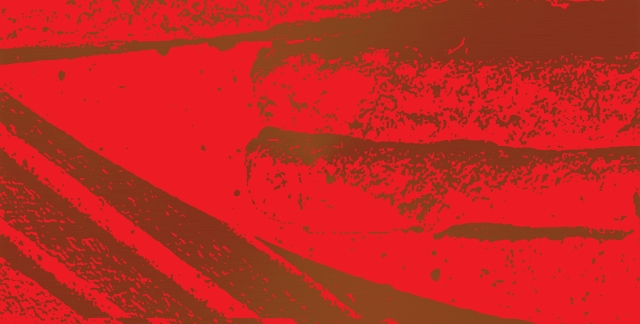 The 2019 Capture Artist Edition is a detail chosen by the artist from her commission for the 2019 Dal Grauer Substation Public Art Project, which is a digitally manipulated photograph. This edition is a cropped version of the work and is reproduced as a screenprint.

Krista Belle Stewart is a member of the Upper Nicola Band of the Sylix/Okanagan Nation and a Vancouver-based artist. Stewart works with video, land, performance, photography, textiles, and sound, drawing out personal and political narratives inherent in archival materials while questioning their articulation in institutional histories. For Earthbound Mnemonic (2019), Stewart used as source material a photograph of tiles she made out of earth from her home in Spaxomin, which she then digitally manipulated and coloured in red and copper to create a visually and contextually multilayered work. 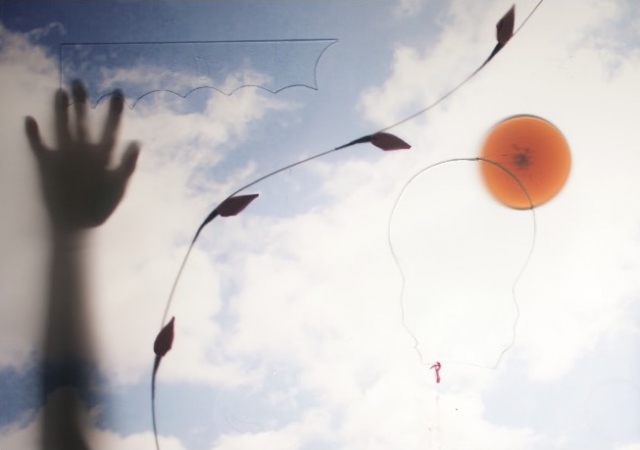 The 2018 Capture Artist Edition is a detail chosen by the artist from her photo-based work for the 2018 Dal Grauer Substation Public Art Project. Drawing from Nadia Belerique’s sculptural works, such as those found in her 2016 exhibition Bed Island, the site-specific image In the Belly of a Cat (2018) plays with the poetics of perception and questions how images perform in contemporary culture.

The In the Belly of a Cat edition crops the portion of the work that includes the artist’s hand—the first time the human form has appeared in Belerique’s practice. This artistic presence, a long-standing art historical tradition, marks the distance between the artist and viewer.

Download Sky Goodden’s essay “Between the Artist, the Subject, and Their Sky” on Belerique’s 2018 Capture public art installation. 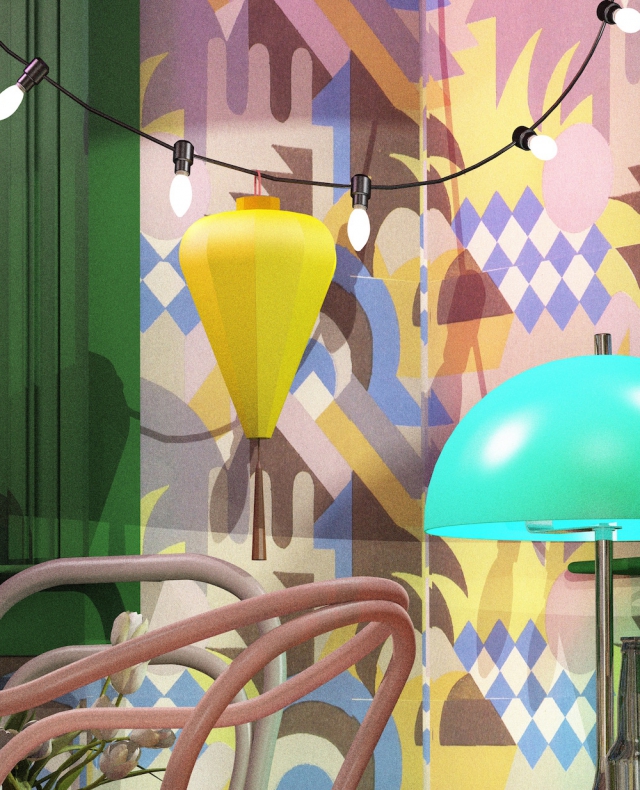 The 2017 Capture Artist Edition is a detail chosen by the artist from her photo-based work for the 2017 Dal Grauer Substation Public Art Project.
Reflecting thematically upon the fragmented nature of Vancouver’s story as a city, Alex Morrison’s Brand New Era Social Club, comments on both digital and analogue forms of representation and their importance in the construction of past narratives and contemporary reality. The room that appears in the image is a three-dimensional rendering that combines photo-collage with Morrison’s amateur digital drawing skills, which has been framed and cropped to the artist’s liking.

This act of selecting a frame from a larger reality (or virtual reality, in this case) mimics that of making a photograph, but speaks directly to the constructed nature of many of the images circulating today, especially those emerging from the real estate or industrial design worlds. Though outside of the traditional definition of photography (whereby photo = light and graphia = writing or inscription), Morrison’s work suggests that this definition no longer reflects the medium’s current conditions. 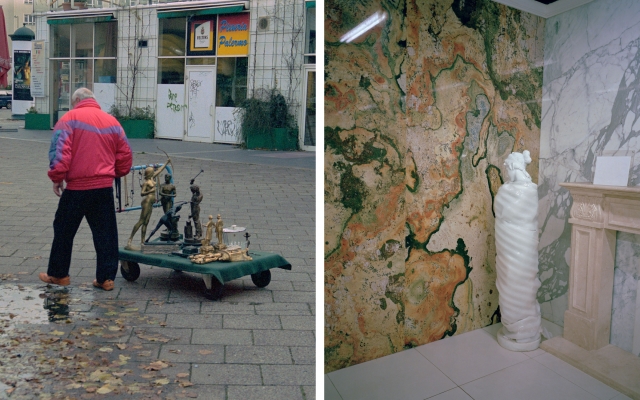 Neither a so-called street photographer nor interested in the rhetoric of staged photography, Stephen Waddell creates photographs that deliberately exist in a place of ambiguity. In his work, Waddell intertwines the realist history of early modern painting with that of early street photography to create considered studies of anonymous figures working, relaxing, and moving through the urban environment.

This artwork was originally a public art commission for the Capture Photography Festival in partnership with Burrard Arts Foundation. Placed on the facade of the Dal Grauer Substation, the work finds links to mid-century modernism, with its renewed optimism for the possibilities of art, architecture, and technology and their ability to enhance the public realm. 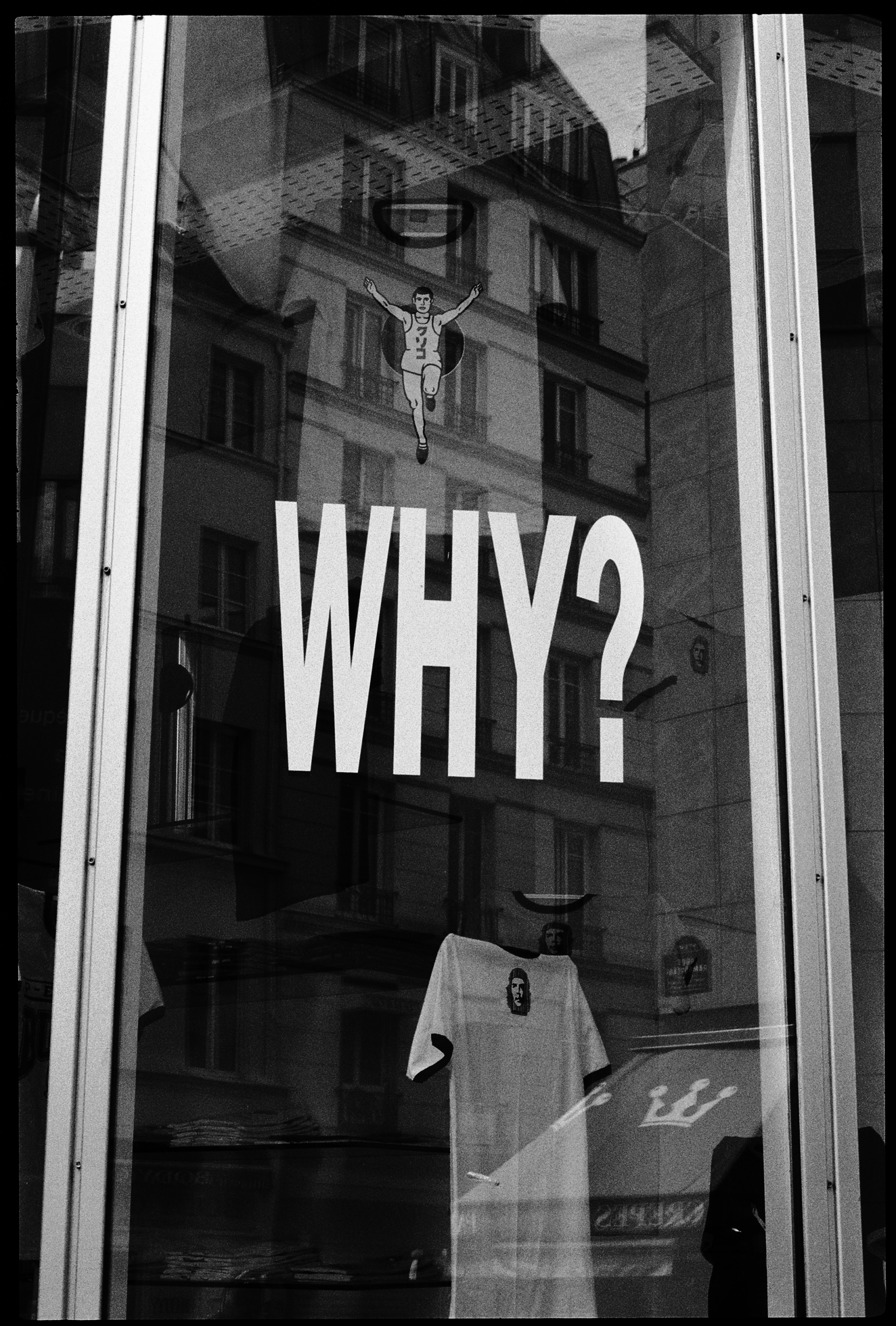 This image was taking during a trip to Paris, when Dana Claxton roamed the streets with her old Canon AE1, looking for the American Indian in the Paris cityscape. The more she roamed, the larger her focus became, growing to encompass the wider sociopolitical and spiritual environments of the City of Paris—the grand dame of political thinking, culture, and pleasure.

During a stroll down one of many cobbled streets, Claxton saw in big letters on a storefront window the word “WHY,” leading her to think of how this simple three-letter word drives so much research, critical thinking, spiritual inquiry, and human behaviour and histories. The photograph captures a multitude of reflections that are as layered as the word itself, WHY. 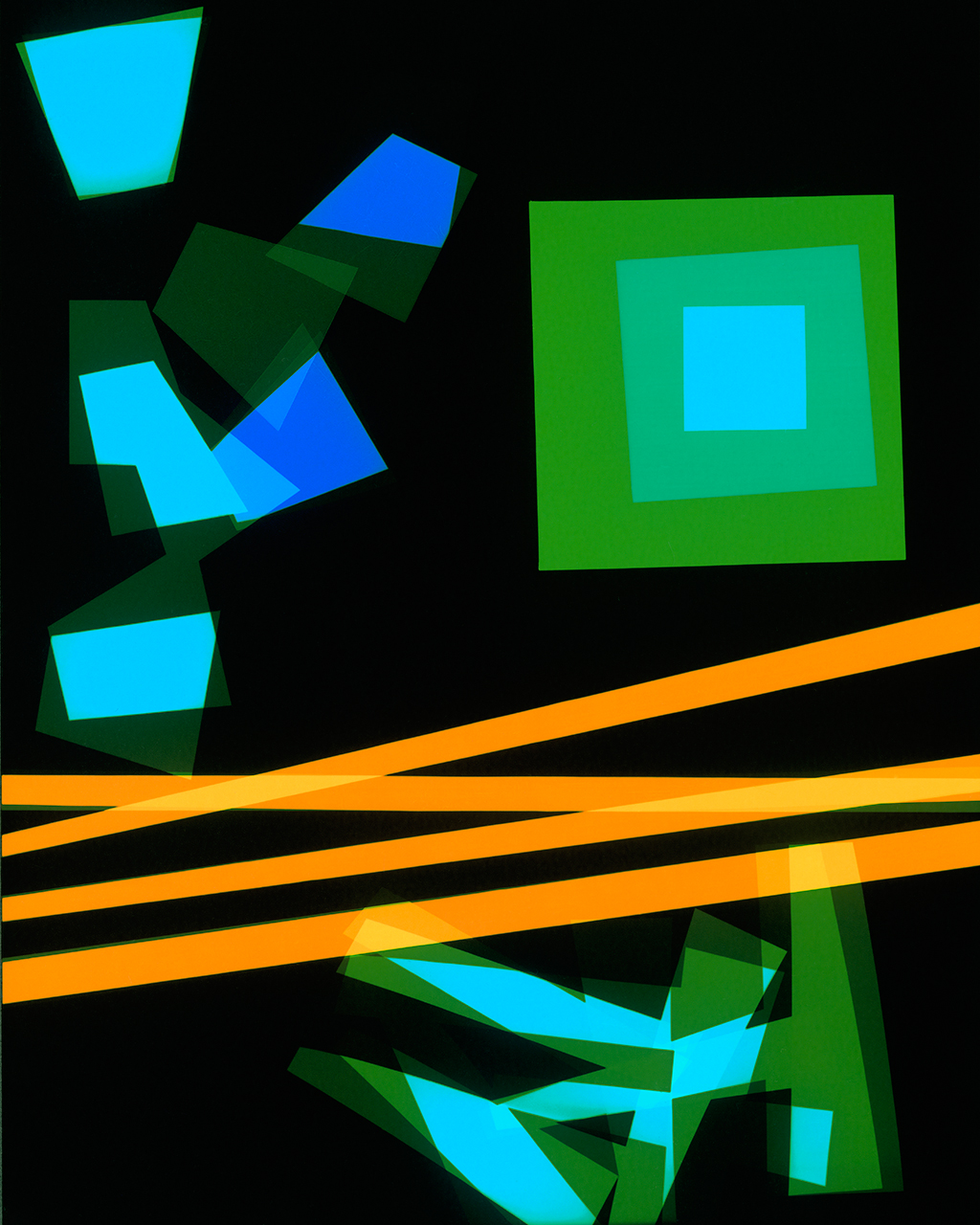 By the nature of the photogram process—which involves using light-sensitive photographic paper but no camera to create an image—each number of Patryk Stasieczek’s Tactile Compositional Iteration will be a variance on the image pictured here, which is the first edition. Each subsequent edition will be a variance of a calculated attempt at generating a similar composition. Matters of chance and movement during the exposure and placement of materials onto the photographic paper will render a slightly different image each time, making each photogram a unique edition from a larger series.

Patryk Stasieczek is an LGBTQ visual artist living between Montréal, Quèbec, and Vancouver, British Colombia, Canada. He was the director and co-curator of Gallery 295 in Vancouver, BC, an exhibition space that focused on emerging photographic practices and discourses. He is part-time faculty at Concordia University and previously held a sessional faculty position at Emily Carr University of Art Design. His practice frames the photographic as an iterative and transdisciplinary subject oriented through the embodied arms of curation, installation, documentation, and education. 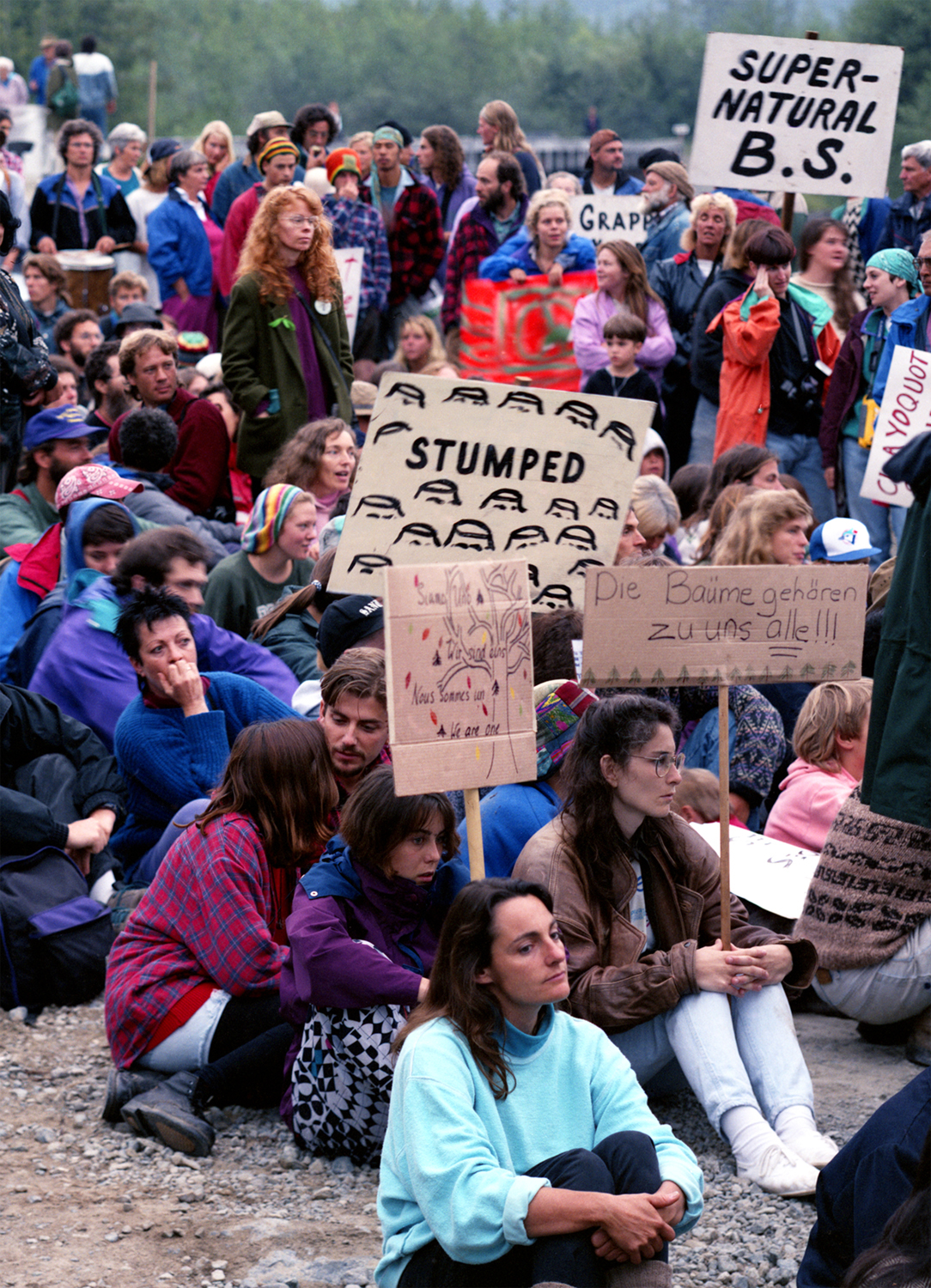 This work is an inkjet edition version of a detail from the first large panel of Ian Wallace’s nine-panel canvas work Clayoquot Protest (August 9,1993), which is in the collection of the Vancouver Art Gallery. This detail selects a specific moment in the drama of the protest.

What attracted Wallace to this detail from the original panoramic photograph of this gathering of several hundred people is the pensive woman in the foreground, who provides a pedestal for a constellation of portraits of individuals engaged in a demonstration of resistance to authority in the name of a politics of ecological responsibility. There is a rich diversity of expression in these portraits: from anxiety to felicity, from serious purpose to wonder and doubt. Wallace hopes this image will provide an emblem for a contemplation of the complexity of this struggle between human ideals and the exploitation of nature. 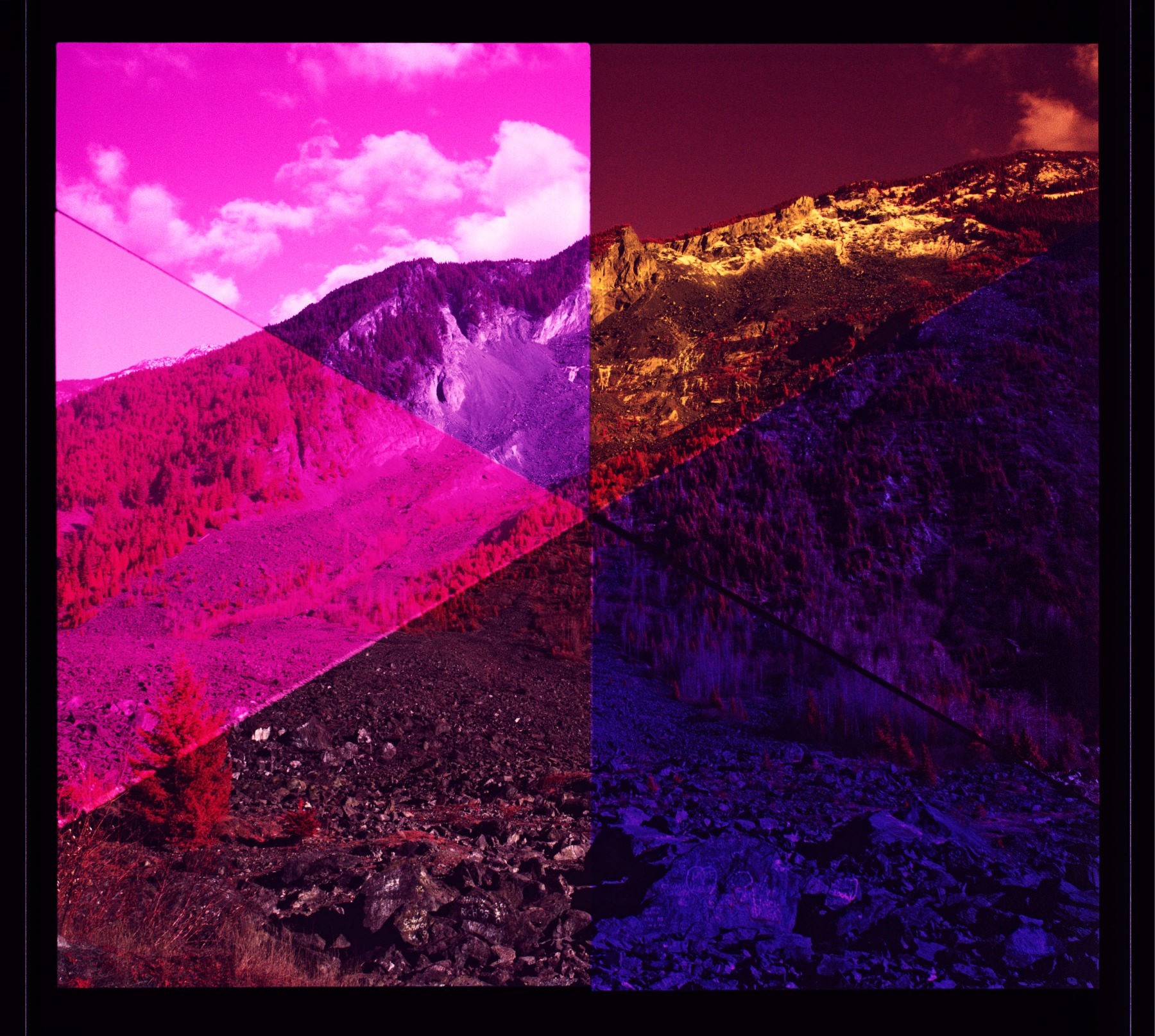 Scott Massey’s Spectrum Studies series explores the spectrum of visible and invisible light waves that illuminate our world, with each study capturing a “durational landscape” in a single print. His contribution to the Capture Mini Editions series, Spectrum Study 4 (infrared), was shot on rare infrared film, resulting in a rich and lush colour palette that belies the landscape’s harsh topography and history. The work depicts the Hope Slide, Canada’s largest ever landslide, to which Massey is returning for his next photography series, presented at Burnaby Art Gallery during Capture 2015.

Scott Massey obtained his BFA in Photography from Emily Carr University of Art + Design in 2003 and has since appeared in group and solo shows across the country, including at the Contemporary Art Gallery, Vancouver; Dazibao Gallery, Montreal; the C. H. Scott Gallery, Vancouver; the Surrey Art Gallery; and Luminato Festival, Toronto. Massey most often works with the medium of light, manifesting as photography but also as installation, sculpture, and video. He currently lives and works in Vancouver. 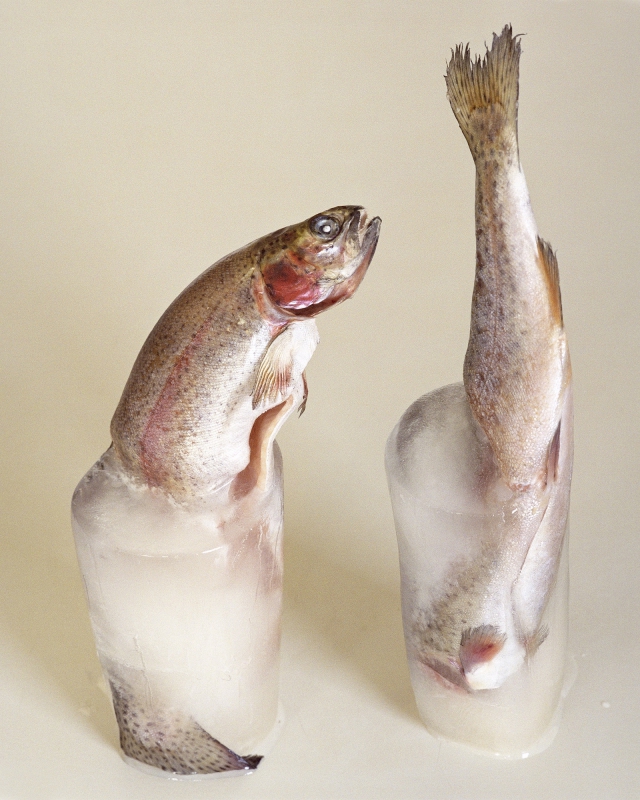 Birthe Piontek’s edition, Trouts, is selected from her Lying Still series, which began as a visual diary of the artist’s journey through a sickness but transformed to take on larger themes of change, aging, and individuation. Comprised of self-portraits and still lifes, Lying Still explores conscious and unconscious aspects of the human condition, from sexuality and desire to mortality and fear, and our responses to the inescapable force of change.

Birthe Piontek is a German-born, Vancouver-based artist, whose photographic practice focuses on portraiture while also incorporating elements of installation and sculpture. Her work is held in private and public collections around the world, including the Museum of Contemporary Photography, Chicago, and the Museum of Applied Arts, Gera, Germany, and has been published in Le Monde, Wired, and the New Yorker, among others. Her most recent series, The Idea of the North (2008–10), won the Critical Mass Book Award. Birthe Piontek is represented by Charles Guice Contemporary, New York, and Kominek Gallery, Berlin.

Composed of dozens of photographs digitally layered together into a single image, Danny Singer’s Trossachs depicts the southern Saskatchewan hamlet of Trossachs, population 42. Singer creates his works by moving his camera slowly down the main streets of prairie towns, taking photographs every few feet to develop a final, flat depiction of the entire street in extreme detail. His images are normally presented at a massive scale of six to nine feet wide, but for the Capture Mini Editions series, Trossachs has been shrunk to just under two feet.

Edmonton-born, Vancouver-based photographer Danny Singer has been capturing the main streets of small prairie towns in panoramic photographs since 1999. His photographic career began in film, as a cameraman and director for the CBC, moving into still photography when he relocated to Montreal in 1970. Singer’s work is held in public collections across Canada, including the National Gallery of Canada, Ottawa; the Vancouver Art Gallery; and the Mendel Art Gallery, Saskatoon. Danny Singer is represented by Gallery Jones, Vancouver. 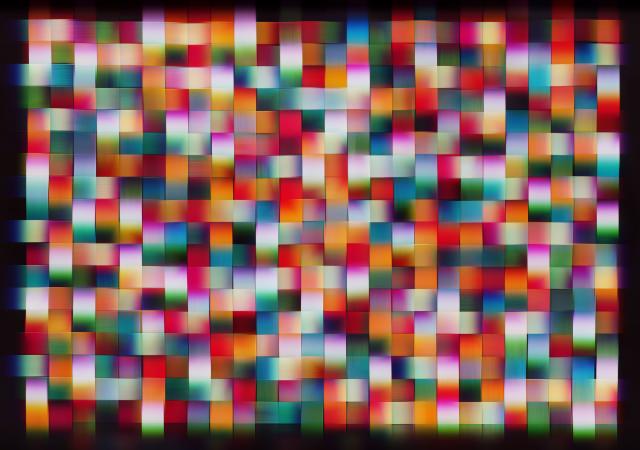 Jessica Eaton’s Capture Mini Edition is a scaled-down version of her public art installation at the BC Hydro Dal Grauer Substation, which draws inspiration from the building’s midcentury architecture and minimalist artists like Sol LeWitt. This brand-new work employs Eaton’s trademark photographic process, by which she creates intensely coloured photographs using black-and-white film. She accomplishes this by “mixing” light within an analogue camera directly onto the film, using photo filters and multiple exposures to manipulate the photographic process.

Regina-born artist Jessica Eaton is a graduate of Emily Carr University of Art + Design and is currently based in Montreal. Her practice revolves around the chemical and material aspects of photography, using analogue techniques to create images that look more like paintings than photographs. She has participated in numerous national and international exhibitions and was recently called “the hottest photographic artist to come out of Canada since Jeff Wall” by the Guardian. Eaton will launch Wild Permutations, her solo exhibition at the Museum of Contemporary Art, Cleveland, in February 2015. Jessica Eaton is represented by Jessica Bradley Gallery, Toronto; Higher Pictures, New York; and M+B, Los Angeles.